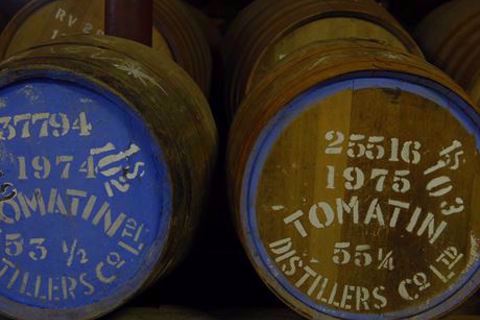 Tomatin Distillery in many ways has had quite a remarkable rollercoaster history. Located in Inverness close to the Western edge of Speyside, the distillery opened up in 1897. Post-World War II it underwent a huge expansion going from two stills up to 23 and making it Scotland's largest distillery. However, the timing was awful as Scotch whisky had just gone into decline and by 1985 the distillery had gone bankrupt and into liquidation.

The saviour arrived from an unexpected source, as the distillery was bought by company Takara & Okara and it was the first Japanese foray into Scotch whisky. Under Japanese ownership, the Tomatin Distillery production was downsized and there has since been a slow evolution from making fillings for blends into becoming a well-known Single Malt brand. In recent years they've established a core range of a NAS; a 12, 18, 30 and 36-year-old with many, many limited-editions released. In 2010 Tomatin Distillery started making a limited amount of peaty whisky called Cu Bocan, then in 2018 a very rare 50-year-old expression was bottled (£10,000 RRP!).

Today production capacity is about five million litres with a varied fermentation of between 55 and 110 hours. They're aged in a variety of casks and like many distilleries, you can find many different finishes. One important point to highlight for investors is, it is clear that the distillery is taking its foray into establishing itself as a premium single malt brand very seriously.

An example of this is how much they are investing in their wood policy and the fact that they now age their whisky in a significantly high percentage of first-fill bourbon and sherry butts. The progress of Tomatin Distillery has been slow and steady, but the liquid has certainly improved since the dark days of the 80s. This has meant that they have slipped under the radar a bit so adding the odd cask of Tomatin could be a very savvy long-term play for any portfolio. The value is still certainly there.

To find out more about purchasing Tomatin Whisky, contact The Masters today!