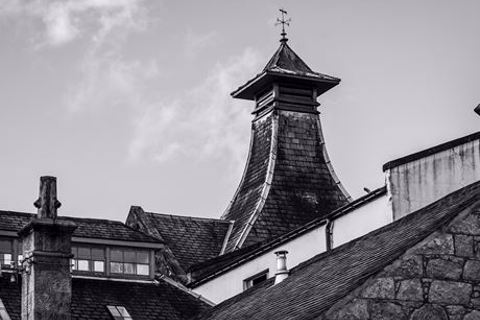 It was probably destiny that a distillery was going to be built on the Knock Estate by Huntly in Aberdeenshire. With a high-quality water source, surrounded by fields of barley, a peat bog close by and a newly opened railway station to connect with the world. Therefore in 1893, the Knockdu (which means ‘The Hill’) distillery opened. Production up until 1988 was very stop-start with the distillery closing and reopening several times. During WWII it closed and was used to house Indian troops! It’s a fairly small distillery that for many years flew under the radar a little bit compared to some of the famous big celebrities down the road in Speyside but recently it has started to make a name for itself.

This century they have increased production with about 25% of that heavily peated. When we tasted it we found it quite sweet and floral with a gentle sweet smoke on the pallet, a very easy drinking malt with a dryish finish. They have entered a lot of the global competitions in more recent years and their 12 and 18-year expressions have started to pick up a significant number of awards. If you’re looking for a Malt that is starting to climb the ranks and could get promoted to the premiership then Knockdu is seriously worth looking at. As a final note, the distillery usually trades under the name ‘AnCnoc’ as Knockdhu was being confused with the unrelated Knockando distillery.

To find out more about purchasing Knockdhu Whisky, contact The Masters today!