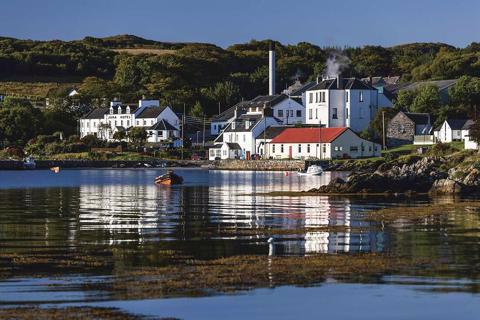 There is evidence that some form of distilling has been going on in Jura for centuries. The current Jura Distillery can trace its history back to 1810, but after going through several name changes and ownership the distillery was closed and dismantled in 1901. The real story of Jura actually started in 1963 when Scottish & Newcastle breweries reopened the distillery and commenced production. The new stills installed were 7.7 metres tall (2nd tallest in Scotland), and with stainless steel washbacks and a relatively short fermentation time, the new style of Jura could only be described as quite light, salty, nutty and delicate.

From the 1990s a small amount of peated whisky was produced and today they blend this in to just add a wisp of smoke to the modern Jura style. Whyte & Mackay took over ownership in 1996 and can be given a lot of credit for their investment, expansion and innovation of the brand. The core range today consists of a NAS called Journey, a 10-year, a 12-year, a Seven Wood and the very well-received 18-year which is finished in red wine casks. Besides this, there are now a whole plethora of limited-edition and Travel Retail special editions, and we think it's safe to say that Jura is now firmly established in the upper ranks of Single Malt brands.

This is an opportunity to buy into a well-known established brand in which the owners are investing heavily (Dalmore is one of the sister brands). The whisky clearly ages very well in every type of cask imaginable and our advice would be to hold onto this cask until it is 18-years-old where the demand from the Independent Bottlers will be highest. Jura is a great addition to any portfolio.

To find out more about purchasing Jura casks, contact The Masters today!