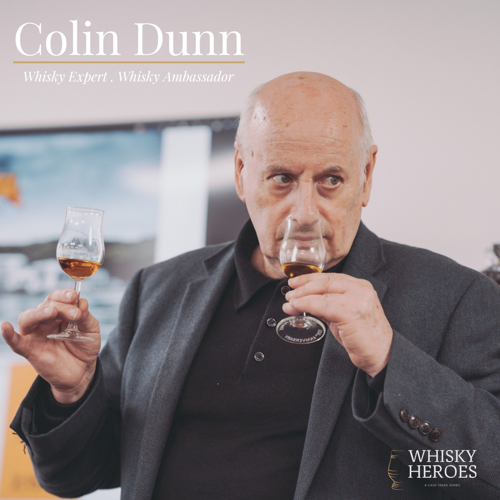 Colin Dunn has been in the whisky industry since last century when, after setting up a whisky club, he got snapped up by Suntory, initially looking after Bowmore Auchentoshan and Glen Garioch then helping to release Japanese whiskies into the UK - Yamazaki, Hakushu and Hibiki.

Colin took on a new challenge in 2008 joining Diageo and working with their malts and blends, hosting and presenting to bars, clubs, restaurants, and via social media.

Can you remember your first dram?

"Me? Remember my first dram? I couldn’t tell you. I know I used to sit in the pub down in Cornwall with my dad when I was six and watch him have a dram at the end of the evening to give him a spring in his step on the way home. I could say it was a Johnnie Walker Black Label, but it would be a fib."

What attracted you to the industry?

"Curiosity. I knew a lot about wine, but my whisky knowledge was zero. I started a Whisky Club and proceeded to invite people from the industry to come and host an evening with the members. I was fascinated listening to people like Bill Lumsden, Jim McEwan elucidate about whisky and I was drawn into their passion and enthusiasm. At the time whisky was just starting to be talked about and I would hang out in London with the Milroy brothers in Soho and listened to their stories."

Can you share some memorable moments of your career or with whisky?

"Meeting Jim McEwan. When I first met him I knew I was speaking to someone very special. He was a trailblazer in Scotch, an ambassador up there with Tommy Dewar, full of enthusiasm and passion. He always had time for people, made them feel special, and a great sense of humour. He still has. My moment with Jim was when he asked me on stage in front of 200 people to talk about my favourite Bowmore, the 17yo. I had never spoken in public before, but he cajoled me into it. He still inspires me today."

What advice would you give to someone who is new to whisky?

"Don’t believe the hype! Go to (if you can) whisky bars, speak to bartenders, check out whisky festivals where you can spend the whole day listening to people in the industry tell you about their brands."

How much should someone spend on a bottle of whisky?

"That really depends on what you earn and what disposable income you have. Having said that, I know lots of people who spend lots of money on a whisky that is a limited edition or is very old. Live within your means. There are some great whiskies out there for £30-£40. What matters is what style you like."

If you could only drink one whisky for the rest of your life which one, would it be?

"I would be spoilt for choice on this one. My three all-time faves are (in no particular order): Auchentoshan 1965 Single Cask 2508 48.9% presented to me by Suntory after winning Class Magazine Ambassador of the Year in 2008: Springbank 1965 (again) Murray McDavid 46%, sensational expression that blew me away; and, finally, and if pushed would choose this one, Karuizawa Bourbon Cask no. 8897 1984 29yo 53.9% tried at the Whisky Show 2014. The missing link between Bourbon and Scotch. Karuizawa is noted for its big Sherry dominated style, but for me, their Bourbon releases, and there isn’t that many of them, are what floats my boat."

Who do you consider to be a whisky icon?

"Jim Beveridge - Whisky Blender at Diageo, now retired. What an alchemist he was. Maureen Robinson also from Diageo. Her palate is right on point, and I love what she creates. Phil Huckle, who put in the hours and spread the word far and wide for Chivas. Phil is one of the unsung heroes to me so he gets to be called an ‘Icon’ although he would probably hate the title. Xavier Landais Director of Bars at Sexy Fish, his Japanese Whisky selection is a real tour de force. Within Diageo, David Sinclair, now at Macallan, Tod Bradbury, Head of Rare and Collectable Whiskies, Ali Reynolds, Bartender Extraordinaire and many other colleagues who have inspired me over the years."

What is your favourite whisky bar in the UK and globally?

"Melody Whisky bar in Hammersmith, Milroy’s in Soho, and Bon Accord in Glasgow. Three Bars where Whisky is the conversation, and the staff are first-rate at all of them.  Keens Steak House in New York has a phenomenal selection of whiskies as well as a brilliant restaurant (their mutton in particular)."

"Lagavulin 10yo, tasting note: Raw meat in a butcher’s shop."

What do you enjoy drinking when you aren’t having a whisky?

"Riesling from Alsace is my white wine choice. My dream Red is Rockford Basket Press Shiraz from the Barossa Valley in Australia. Robert O’Callaghan has done an amazing job there, and he is another big hero of mine. Old vine shiraz is a bit special."

Where do you see Scotch whisky in 5 years?

What are the future challenges for the whisky industry?

"Make sure it is marketed in the right way. There is a lot of stuff out there, honesty and a good backstory are more important to me than anything else."

What are your views on chill filtering and caramel colouring?

"Consistency of flavour and colour is important to the public. We could spend a long time debating this topic. We would get the same answer."

Who is making the most innovative style of whisky?

"USA, in particular New York. For its architecture, museums, parks, and a host of other things like McSorleys Old Ale House on 7th Street, one if not the oldest bars in town."

Do you have any funny stories from your travels?

"The early years of my role as ambassador. It was so different then to now. The audiences were all male and most of them were set in their ways. I had many an argument when I mentioned water, then ice as an addition.  Being refused a “Smokey Cokey” (Lagavulin and Cola) on Islay, they wouldn’t serve the liquids in the same glass. Same on Skye, I ordered 20 Talisker & Soda for my guests in a well-known hotel on the island and they refused to put both ingredients in the same glass, saying it was sacrilege to add anything to the Talisker.

I remember once I was hosting at the Serpentine Gallery in London and this person stood up at the end of the tasting and said that she disagreed with everything I said apart from Whisky number three (of five). She was going left to right and I and everyone else was tasting right to left. At least the one in the middle hit the spot."

"Islay can be hit or miss; the weather is so unpredictable that I don’t feel comfortable until I embark at Terminal One Islay Airport. I’ve been stuck there a few times, sometimes taking days to leave, which is not necessarily a bad thing."

"No real favourite. Flybe can leave a bit to be desired! I Always carry a good book to read in case I get delayed."

You have a £100 voucher to buy either Scotch Single Malt or Irish Pot Still, which one would you buy and why?

"Okay, I’m biased. I’d buy a Cragganmore Port Wood Finish. It has a consistency of flavour, works well neat, in a highball and in a cocktail. If the shop was sold out, I’d take a bottle or two of Powers John’s Lane. Both whiskies are steeped in history, and I have been lucky enough to sample them regularly over the years.  In fact, I fancy one of either right now…"