Should you judge a whisky by its colour?

‘Don’t judge a book by its cover’ is a phrase we’re all familiar with yet at times guilty of ignoring. So, should you judge a whisky by its colour?

We buy with our eyes.  When comparing a dark-coloured whisky with a light-coloured whisky our brains trick us into telling us that the darker whisky is superior. This is due to a misconception that colour reflects richness of flavour. However, we must bear in mind that with taste this is not always the case. A well-made bearnaise sauce can be much fuller flavoured than an average dark gravy, in very much the same way a craft India Pale Ale will be tastier than a can of Guinness. 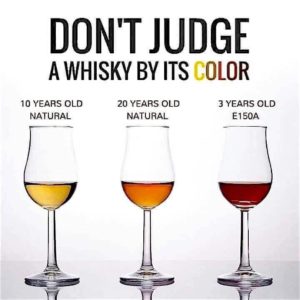 Many whisky companies fool us with a simple trick. They add E150A, or caramel colouring, which makes many of your favourite single malts unnaturally dark.

Other whiskies, especially single cask releases from fresh sherry casks, impart the colour of the liquid they’ve previously held. However, these casks only account for a minute proportion of all scotch whisky. While the flavours can often be rich with oodles of dried fruits, it’s worth bearing in mind that pale whiskies such as a classic Ardbeg 10-Year-Old are equally rich. - With a heavy peat aroma and fresh fruits such as apples and pears.

It’s not my intention of dissuading anyone from purchasing a dark-coloured whisky, far from it. One of my favourite drams is the GlenAllachie 15-Year-Old which has had a secondary maturation in Oloroso and Pedro Ximenez casks. Next time you’re debating whether to go for a dark whisky or a light whisky, I would encourage you to try both and come to your own conclusion.

Want to keep reading? See our article on comparing younger and older whisky!