When chatting about what I do over a pint at the local watering-hole, people often ask whether bourbon is really whisky. Once, while hosting an ‘Introduction to Whisky’ tasting event several years ago, I included a bourbon. One guest was so shocked that they almost walked out of the tasting!

Simply put, Scotch is whisky made in Scotland, bourbon is a variety of whiskey (note the ‘e’) made in the USA. But let’s dig deeper…

While most associated with Kentucky, bourbon can be made anywhere in the USA. It must be made from over 51% corn (with the rest of the malt bill made up of rye, wheat and barley). And aged in new fill (or ‘virgin’) charred American-oak barrels for a minimum of two years. On the other hand, Scotch whisky ages for a minimum of three years, and usually in second hand (or ‘re-filled’) barrels that were previously those used to age bourbon whisky.

While most Scotch whisky is mass-produced and blended from numerous malt and grain distilleries, most whisky lovers enjoy Single Malt Scotch. This  usually ages twice as long as bourbon whisky in a much cooler environment. As a result, the drink is softer and subtler than bourbon which is usually full-flavoured, oaky and spicy.

People often view Single Malt Scotch as the higher quality whisk(e)y which is not a wise assumption to make. While the Scotch Whisky Association’s rules are strict, they still allow for the use of caramel colouring E150A; this is banned in bourbon. Especially when drinking entry-level whiskies, a cheap bourbon is often a better choice than a cheap Scotch. Next time you’re out, compare a Woodford Reserve to a no-age-statement Glen Keith. I know which one I’ll be drinking!

For an older dram, you’ll probably be wanting to go for a Single Malt Scotch. The evaporation rate of bourbon is so great that it’s rare to find one that’s anywhere near 12 years old, let alone 21! The use of less active oak casks, 100% malted barley, and a slower maturation, results in a much more complex flavour. With hundreds of distilleries and cask types to choose from, the choice is endless!

At the end of the day, I drink young Bourbon and old Scotch and keep bottles of both…

We are delighted to be able to offer a strictly limited number of casks of Blended and Blended Malt Scotch Whisky of the highest quality and at fantastic prices.
With a bottle of Chivas Regal 25-year-old costing £269, we’re able to offer you a 29-year-old cask strength, single cask Blend at approximately £68 in-cask. Ranging from 1990 to 2004, from Barrels to Sherry butts, these are my top picks: 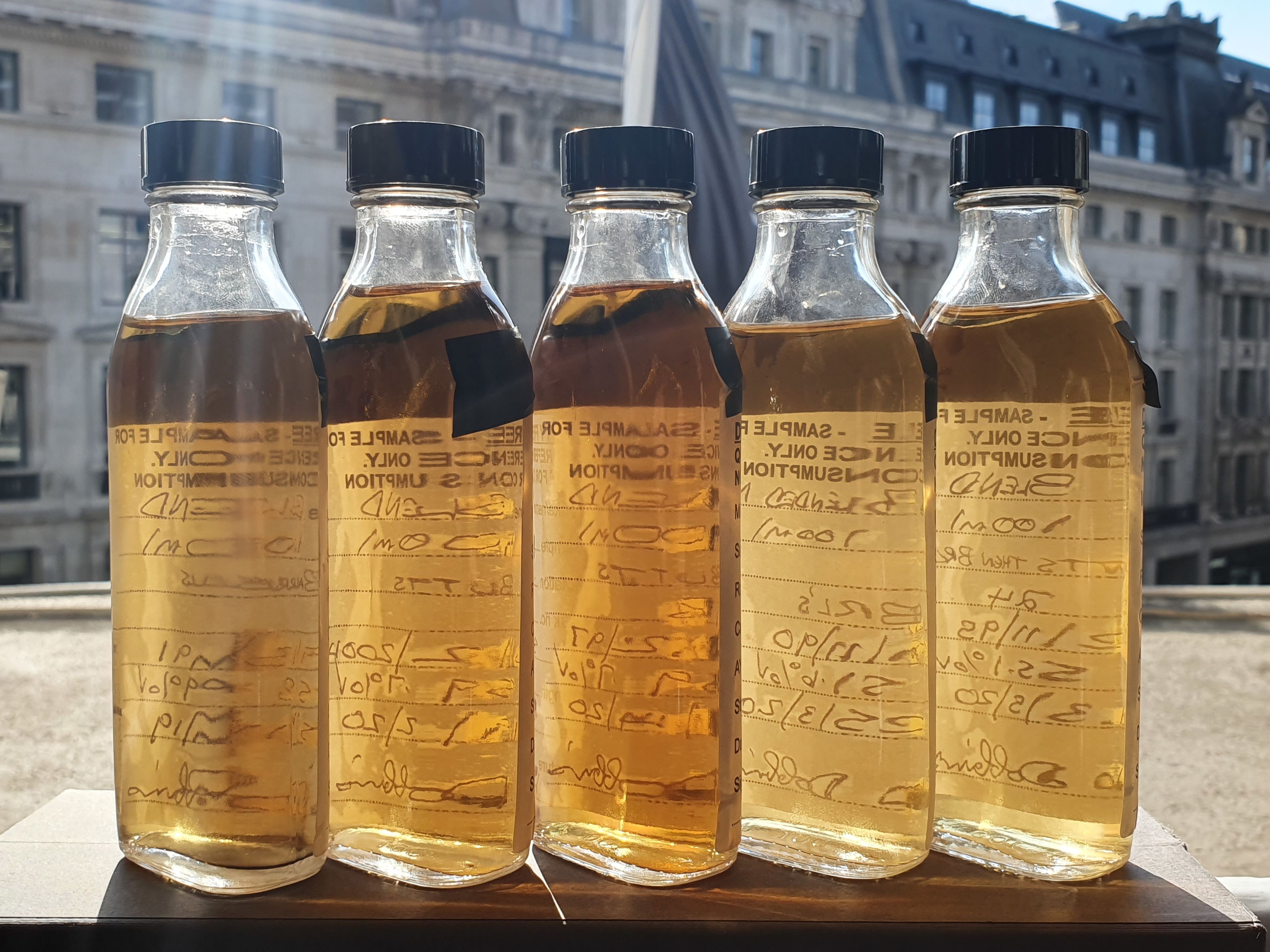 This exceptional Scotch Whisky was first blended together in May 2016 using over 35 of the finest Single Malt & Grain Whiskies from regions all over Scotland. In order to create more depth, the Blend was recasked into 1st Fill ex Bourbon American Oak Barrels and allowed to mature for a further 4 years.

Walnut in colour, the nose shows floral and honeyed sweetness followed by a pleasant yet lively zesty citrus fruit, berry and raisin combination giving it a smooth but very complex nosing experience. Perfect balance of fresh oak and spice which gives it a beautiful caramelised roundness finished by just a hint of peat smoke in the background.

On the palate an explosion of flavours from sweet vanilla, caramel and honey quickly followed by raisins and a rich fruity texture (due to a high percentage of sherry-matured whisky). This leads to a lingering and very pleasant oak and peppery mouthfeel which is enhanced from the 3 years of finishing in 1st fill ex Bourbon American Oak Barrels.

First Blended in 2010, the spirit has spent time a combination of ex 2nd Fill Oloroso Sherry Butts and 2nd Fill ex-Bourbon White Oak Barrels.
This is a complex and powerful Blend which includes whiskies from over 45 of Scotland’s finest Single Malt Distilleries. From the Highlands and Speyside region to the Lowlands and Islands and 3 Single Grain Distilleries, many much older than 1995.

A deep Mahogany colour, the nose exhibits stewed fruits and honey followed by a malty richness, vanilla and a raisin sherry sweetness with a hint of citrus and subtle smokiness. The palate is rich and smooth with dark raisins, star anise and baked fruits followed by a peppery smokiness. Luscious and lingering on the finish, with fruitiness and a soft vanilla finish followed by a final hint of peat smoke.

Take note, blended whisky is exempt from the Malt tax, 25% tariffs introduced by the World Trade Organisation in 2019, on all Single Malt Scotch Whisky imported to the USA. This makes our blended whisky the perfect option for our USA-based independent bottlers!

Want to talk about your options as a whisk(e)y lover, collector or an investor? Message us and whether you are a first-time or a seasoned buyer, we’ve got something for you!